On Saturday, 1 April 2017, representatives of Czech firms and institutions embarked on a robotics-focused technology mission to Japan, where they visited science and technology institutions in Tokyo, Tsukuba, Osaka and Nagoya.

The technology mission presented Japanese institutions with Czech progress in solutions for Industry 4.0, such as machine vision and image recognition, artificial intelligence, autonomous mobility, collaborative robots and multi-agent systems. The participants offered cooperation to both major Japanese research institutions and industrial giants such as Mitsubishi and Toyota. In the course of the trip, they will also visited, for example, universities in Tsukuba and Nagoya, the Robot Revolution Initiative, the National Institute of Informatics and the Japanese counterpart of the Ministry of Industry and Trade. 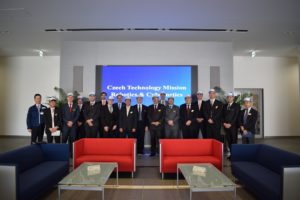 “By means of specialised technology missions abroad, we are striving to bring interesting technology-oriented investment projects to the Czech Republic and to establish new partnerships with leading universities and research centres. For technology partners, we have created the czech-research.com website, which helps us to better present the Czech Republic beyond the country’s borders with respect to high-tech investments,” says Karel Kučera, CEO of CzechInvest.

The group composed of representatives of the companies VOP CZ, CertiCon, FCC průmyslové systémy and AutoCont CZ was led by Professor Vladimír Mařík, director of the Czech Institute of Informatics, Robotics and Cybernetics at the Czech Technical University (CTU). The delegation also included Karel Žebrakovský, former ambassador of the Czech Republic in Tokyo and now head of the science and research department at CTU, Professors Pavel Václavek and Luděk Žalud of the Central European Institute of Technology, and the newly elected rector of the Technical University of Ostrava, Václav Snášel.

“The Czech Republic has a good starting position in applying the principles of Industry 4.0 and has something to offer also to foreign partners. Though Japan is rightfully considered to be a robotics superpower, Czech research organisations and firms are at the peak in, for example, machine vision, artificial intelligence and big data analysis. Active establishment of contacts abroad with the assistance of state institutions is of key importance in supporting international cooperation in robotics and cybernetics,” says Vladimír Mařík, director of the Czech Institute of Informatics, Robotics and Cybernetics at CTU.

The mission was preceded in March by a seminar on the topic of Czech-Japanese cooperation in the area of digitalisation. Organised by JETRO Prague, the seminar was held at the CeBIT trade fair in Hannover.

CzechInvest was part of the team of experts which, under the leadership of Professor Mařík, formulated the National Industry 4.0 Initiative. The Government of the Czech Republic approved this initiative in August 2016. Establishment of the Society 4.0 Alliance, which should contribute additional strategic documents pertaining to Industry 4.0, such as Education 4.0 and Labour 4.0, was approved in February this year.

Information about this mission is available also in Japanese here.