Energy research: key for everyone

The SUSEN sustainable energy research centre, which cost CZK 2.4 billion, will open in Řež and Plzeň in September this year. The centre will contribute to the global development of fourth-generation reactors

It’s simple. Without energy – and electricity in particular – our modern civilisation would not exist. It is a force without which industry and people could not survive… and neither could science with all of its high-tech instruments, including entire disciplines like cybernetics, informatics and astrophysics. Therefore, scientists and firms are constantly researching ways to improve generation of electricity, make it cleaner and store it well and for a long time, which is a major topic for the ever more numerous electric vehicles.

Czech scientists are also contributing to widening our knowledge. In what kind of energy research does the Czech Republic excel? “Definitely an interesting and important matter for the future of the power industry is nuclear fusion. The Institute of Plasma Physics of the Academy of Sciences of the Czech Republic is a highly valued and closely cooperating partner of the ITER project focused on the first large fusion reactor in France. I mustn’t fail to mention the Institute of Nuclear Research and the Nuclear Research Centre in Řež u Prahy, where the SUSEN project, one of the biggest research infrastructures in the Czech Republic, will have its grand opening on September 12th,” said Dana Drábová, a popular nuclear physicist, who has long served as head of the State Office for Nuclear Safety. Also thanks to her activities, the Czech population supports nuclear energy – according to surveys, approximately 65 percent of citizens support it; conversely, in German 65 are against. 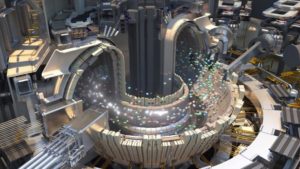 The aforementioned SUSEN centre, which received CZK 2.4 billion (approximately EUR 90 million) from European funds, has facilities in Řež, where the LVR-15 light-water nuclear reactor is historically located, and in the industrial city of Plzeň, a short distance from the German border. Both parts have four research pillars: technological experimental circuits, structural and system diagnostics, nuclear fuel cycle and materials research. “SUSEN shows that Czech materials engineering, which is for nuclear engineering – whether based on fission or on fusion – a crucial issue, ranks among the absolute global elite. And experimental loops on the existing reactor in Řež, which will serve for verifying some technologies for fourth-generation reactors, are absolutely the best,” says nuclear physicist Drábová.

The so-called fourth generation is actually returning to the search for primary prototypes, which more than half a century ago were seen as promising, but technologically too complicated. “This involves fast multiplication reactors, which is a concept based on fission with fast neutrons. Unlike with slow ones, this would bring the possibility of splitting not only uranium 235, but also uranium 238 and thorium, so it would involve better use of fuel,” adds the office chairwoman. Existing sources of nuclear fuels could thus be hypothetically extended for a tenfold longer period.

Nuclear power plants are present in only 31 countries, mostly nations with a strong industrial tradition. Firms supplying components were and are in cities such as Ostrava, Plzeň and the metropolis Prague. “Nuclear energy has one characteristic property – it is truly high-tech, which not every country can afford,” says Drábová.

Not only the nucleus, but also the Sun

Not only more efficient solar panels, but also interest in the broader field of “clean” energy. That is what the Centre of Advanced Photovoltaics (CAP) is about. CAP was established in Prague with CZK 164 million from funds administered by the Ministry of Education. Its conceptual father is Professor Tomáš Markvart of the British University of Southampton, who is returning to the Czech Republic, from which he emigrated in 1968 ahead of the armed forces of the Warsaw Pact. People from the faculties of nuclear, civil and electrical engineering at the Czech Technical University in Prague took part in the inception of the ambitious centre.

The centre includes all aspects of photovoltaics. “From theoretical physics, which helps to increase the efficiency of solar cells, to technological problems, testing and diagnostics of solar panels and their integration into building designs,” Pavel Ripka, dean of the electrical engineering faculty, told Lidové noviny. The aforementioned University of Southampton should collaborate on both research and education.

“A couple of years ago, we decided to transfer my laboratory to Prague and we made a deal with CTU. The objective of the centre is to cover a broad spectrum of research not only in photovoltaics, but also in modern sources of energy,” says Markvart, who studied mathematical physics with David Thouless in Birmingham and became friends with Mike Kosterlitz, both Nobel prize winners. He is also bringing know-how from his work at the renowned Instituto de Energia Solar in Madrid.

Of course, new engineers and researchers do not come only from CTU in Prague and its specialised nuclear and physical engineering faculty, which has its own instructional and experimental VR-1 reactor in Troja. Students of twelve other technical faculties from the whole Czech Republic also receive instruction on this reactor. Brno University of Technology has its own energy institute with a full section of power engineering and there is a complete department of power-generation machinery and equipment at the University of West Bohemia. The Technical University of Ostrava also operates a department of power engineering. 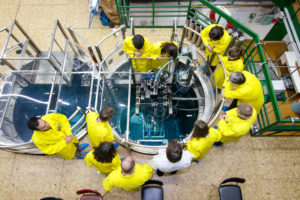 A major player in the field of research and development is the state-owned company ČEZ, an energy giant that cannot afford to lag behind. Therefore, its research division is expanding its key areas including nuclear energy (safety and efficiency, new facilities), reduction of pollutants and greenhouse gases from fossil fuels, use of secondary energy products (landscape revitalisation, gypsum for building panels), increase of efficiency in coal mining, use of alternative fuels (biomass, waste) and understandably also emphasis on renewable sources (installation of roof-mounted photovoltaic panels, penstocks for hydropower engineering, innovations in wind energy and possibilities of using deep geothermal energy for heating). Another fundamental part is support for so-called Smart Cities and improvement of distribution and storage of electricity.

A global response was received by the activities of the firm HE3DA and its large-capacity lithium batteries, energy repositories which, thanks to the use of smart nanomaterials, are intended to compete with the American firm Tesla! Originally a small start-up founded by scientist Jan Procházka of Prague-Letňany, the company plans to build a large factory in Horní Suchá in Karvinsko (northern Moravia). The company is resolving legal protection of its invention in China, Japan, Korea, India and, of course, in the USA.

HE3DA’s ambitions are enormous: “Everyone who works with energy sees a lack of batteries and efficient energy repositories for the needs of households, automobiles, banks and various industrial sectors. The problems of conventional batteries are generally known, whether that concerns the capacity of cells, cooling and related dangerous overheating, and ecological disposal. It occurred to me to try designing a battery using nanotechnology and a different approach to storing energy,” Jan Procházka told the economics weekly Euro.

Jan Procházka showing the internal structure of his HE3DA battery

Not only because of lithium batteries, but also thanks to reports about the significant reserves of lithium in the Czech Republic, this area of the power industry is becoming headline news. The energy strategy of this traditionally industrial country will of course rely primarily on nuclear power. “I think that our state energy concept is well written, considering the reasonably possible. In my opinion, a quite realistic estimate is that sometime in 2040 we could have one-fourth of electricity consumption covered from renewable sources (solar, hydro, wind), another fourth still from coal. But what about the remaining fifty percent? We have only a few options: save, import or produce. What else? The variants are either gas or nuclear. So, approximately 45 to 50 percent from nuclear is expected,” says the respected Dana Drábová. From that, it is apparent that the Czech Republic must continue to focus on this type of research.