Lasers and light: the power of Czech scientists

Unique new centres for laser physics have been established in the Czech Republic: ELI and HiLASE. However, laser and optics research has a long tradition in the country.

It is the most expensive scientific facility in the Czech Republic. The most powerful petawatt laser system will soon be part of the modern Extreme Light Infrasture (ELI Beamlines) research centre in Dolní Břežany u Prahy, which cost CZK 6.7 billion (approx. EUR 250 million). It bears the abbreviation HAPLS. It was developed at the well-known Lawrence Livermore National Laboratory (LLNL) in cooperation with Czech physicists from the Academy of Sciences of the Czech Republic and it has already demonstrated its uniqueness – not only with a world record for diode-pumped petawatt lasers. 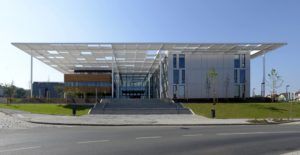 It should be placed in ELI in suburban Prague this year, with launch of operation opened for the international scientific community expected in 2018. “The Lawrence Livermore Laboratory is proud that it could contribute to advancing the scientific and technological boundaries into areas that were previously unreachable,” said Bill Goldstein, director of LLNL. “Twenty years ago, LLNL was a pioneer of the first such lasers with the NOVA Petawatt system. HAPLS now represents a new generation of lasers with previously unseen parameters. In February of this year, the new “superlaser” as it is called in the Czech media, set a world record with energy reaching 16 joules and pulse duration of 28 femtoseconds (which is equivalent to pulse peak power of approx. 0.5 petawatt) at a 3.3 Hz repetition rate (3.3 times per second).

For astrophysics and security

In recent decades, so-called high-powered lasers have opened new directions in research with significant application and social impact, an ingredient of expensive research demanded by the public. “When targeting petawatt laser pulses, tremendous light-field intensity is created and secondary resources are generated, especially electromagnetic radiation (for example, x-rays with high luminosity) and accelerated charged particles (electrons, protons and ions),” say the scientists in Dolní Břežany. These secondary resources enable new possibilities for a  number of hot areas of research, including proton and x-ray radiology, laboratory astrophysics and, for example, medical applications for treating cancer. Lasers are of course important for development of applications in the fields of national security, laser fusion and high-tech industry.

“We have never been in a standard client-supplier relationship with LLNL. Approximately ten of our scientists and engineers have directly taken part in development in the past period. This integration is significant added value not only for the future operation of the system, but it also gives our specialists great experience,” said Bedřich Rus, head of the laser technology department at ELI and one of the spiritual “fathers” of the superlaser centre. The Czech centre is part of a European Union consortium, whose other parts are located in Szeged, Hungary, and Măgurele, Romania.

Such a large and complicated project, which as a European infrastructure occupies the ESFRI “roadmap”, understandably did not arise without complications and delays. Due to financing, it was divided into two programming periods (phasing); assurance of sufficient funding is being debated though, for example, scientists from ELI recently succeeded in several generous domestic grants for excellent teams, competing for a total of CZK 5 billion (EUR 200 million) from the Ministry of Education.

The little brother is in Dolní Břežany. In a small town just outside of Prague, there is another super-modern laser centre, HiLASE. Scientists dressed in white and wearing safety glasses have been working in it and its clean spaces for a few years already, since the start of operation. Among the scientists, there are also engineers from a number of technology firms, as this centre adopted as its motto the slogans “New lasers for industry and research” and “Superlasers for the real world”.

While ELI presents itself as a centre of top-quality basic research, HiLASE is much more focused on industrial applications. It was established at a cost of CZK 800 million (EUR 30 million) and is betting on lasers with high-medium power, i.e. high pulse energy and high repetition rate, which are based on diode pumping (DPSSL). Among other things, the most powerful hundred-joule and ten-hertz device with the characteristic and purely Czech name Bivoj has been in operation here since last year; with a shot, it is able to change the properties of metals, thus hardening their surface. 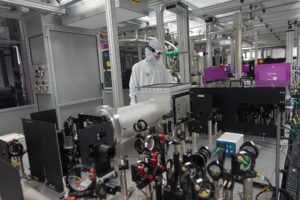 Numerous industrial uses for these lasers are taking shape. The scientists in Dolní Břežany thought about why they should specialise and diffuse their efforts, and thus last year they sent to roughly one hundred firms in the field, institutes and universities around the world a questionnaire on what interests them and what they need. Three areas emerged as promising: the aforementioned laser hardening of material surfaces with a pulse wave (peening), measuring the threshold of material damage with a laser and rapid laser micro-machining.
“Hardening light materials such as aluminium, titanium and alloys thereof extends the fatigue time of their service life by up to a factor of seven,” the scientists explain. If this were used in hip joints, the increased service life of the replacements would limit complicated repeat surgeries among older people in their seventies and eighties. Other uses are offered in aviation, prospectively in the automotive industry, as laser “hammering” increases durability and reduces the weight of parts.

Measuring the stress on optical elements in HiLASE is used by Czech firms such as Meopta (contact lenses, telescopes) and Crytur (crystals). There are only a few similar centres in Europe, namely in Germany, France and Lithuania, which are overloaded. Outside of Prague, they now offer an additional service: thanks to the team of physicists and engineers, they offer interpretation of results and proposal of solutions in relation to measured values.

Teaming with the British STFC

Evidence that they are doing well is not only the ministerial grant for the excellent team of Professor Naděžda Bulgakovová, but mainly the success in the Teaming challenge within the Horizon 2020 programme. “We have had close ties with British scientists for more than a quarter of a century. We have expanded due to the fact that last year the STFC (Science and Technology Facilities Council) delivered to us our biggest laser, on the development of which we have also worked intensively,” the head of the centre, Tomáš Mocek – a manager, but also scientist at the Insititute of Physics of the Academy of Sciences with two hundred studies – told Lidové noviny.

In the next five years, CZK 1.2 billion, which is EUR 45 million, will be put toward combining British and Czech know-how. The Czechs want to be inspired also in transferring scientific findings into industrial practice; a way to earn money for themselves. “The English are good businesspeople, and we have to learn that from them,” say physicists referring to the Harwell Science and Innovation Campus near Didcot as well as at Oxford, where not only the Rutherford Appleton Laboratory (RAL) is located. At RAL, they successfully offer the capacity of their laser systems to external users, but other research centres connected with incubators and innovative firms are also located there. For that matter, a noteworthy area a short distance from the Prague airport is taking shape. It is called STAR, an acronym of the English phrase Science and Technology Advanced Region. The large biotechnology and biomedical centre BIOCEV is also located nearby.
“With significant collaboration of British scientists from the STFC Central Laser Facility, the HiLASE project is a practical example of international cooperation in top-level laser research. As such international collaboration is very important in science and in the area of development of laser technologies, Czech and British scientists should have access to the best equipment for further successful discoveries thanks to European Union financing,” says Otakar Fojt, science attaché at the British embassy in the Czech Republic. 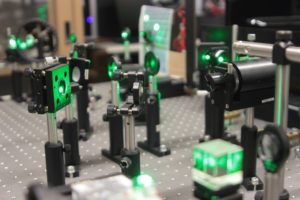 In addition to technological equipment, smart people with ideas are also necessary. Laser physicists are trained at Charles University and the Czech Technical University in Prague, which have joint doctoral programmes with the Academy of Sciences. Lasers and the use of light rays are researched also by engineers at Brno University of Technology, though scientists in Olomouc also do especially well in optics. “Optics is a modern science with countless applications in everyday life, from glasses lenses to lasers. In our optics department, you can study the laws of geometric optics, which are applied in, for example, designing and constructing optical systems, modern optoelectronic systems using lasers and fundamental laws of the quantum world, quantum computing and information processing,” states the website of the optics department at Palacký University in Olomouc. It is not surprising that researchers maintain some of their most active cooperation with the firm Meopta in nearby Přerov, whose history dates back to 1933. Among other things, the firm manufactures rifle scopes with laser sights and range finders, camera systems, night-vision equipment, laser projectors and numerous other optoelectronic products. There is a broad spectrum of uses of light in the Czech Republic: from basic research to actual and final products.