Automotive Industry – The Engine of the Czech Economy

Vehicle manufacturing is the strongest industrial sector in the Czech Republic. Without the country’s tradition of mechanical engineering and high-tech development, there would be no electric vehicles or firms like Škoda Auto or Tatra

It can be said without exaggeration that the automotive sector is an economic pillar of the Czech Republic, as the country offers development of artificial intelligence that is expected to drive the autonomous vehicles of the future, improvement of the handling and performance of electric vehicles and traditional skills in manufacturing standard vehicles with internal-combustion engines. According to statistics from February 2017, 118,000 people work directly in the Czech automotive industry, though that number rises to 400,000 when figuring in the employees of indirect suppliers.

The spring report of the Association of the Automotive Industry, which includes 114 vehicle manufacturers and suppliers, states that the automotive industry accounts for roughly nine percent of the Czech Republic’s GDP and one-fourth of Czech exports. Where does it get such strength? What is behind these results?

Together with Daimler and Peugeot, Tatra (originally Nesselsdorfer Wagenbau-Fabriks-Gesellschaft) ranks among the world’s three oldest carmakers with uninterrupted production, as its Präsident passenger car first rolled out of the company’s plant in Kopřivnice in northern Moravia in 1897. A year later, Tatra added a freight vehicle and the company, which made a good name for itself in the Rallye Dakar, recently wagered its fortunes on the production of such vehicles.

That hasn’t always been the case. Tatra first gained renown due to its elegant passenger cars with powerful engines bearing the stamp of the brilliant designer Hans Ledwinka, who from 1923 developed the Tatra 11 model featuring a frameless chassis concept with a central beam and swing axles (backbone frame or, as it is also known in the world, the Tatra concept). Other valuable projects include the revolutionarily aerodynamic Tatra 77 of 1934, the legendary Tatra 87 and the dashing Tatra 603 which, however was available only to Communist Party apparatchiks in post-war Czechoslovakia. 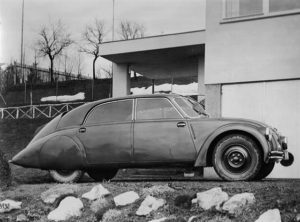 The Laurin & Klement brand has a similarly strong tradition, which began in 1895 with the production of bicycles and motorcycles. Since 1925, when the company was acquired by Škoda, the brand has been synonymous with passenger cars. Thus was born the Škoda Auto brand, which today is a global player selling cars around the world, from Europe to China and as far afield as Australia. After the revered Škoda 1101 Tudor and the Škoda 1000 MB of the 1960s, the brand fell into decline. But gone are the days of the Škoda 105 of the 1980s, which was widely mocked by the Brits. In 1991, Škoda was acquired by Volkswagen and began developing newer reliable yet affordable cars called the Fabia, Octavia, Superb and, more recently, the Yeti and Kodiaq SUV.

Tatra and Škoda were not alone. In the historically heavily industrialised Czech lands,  passenger and freight vehicles rolled out of the factories of Praga (established in 1907), Aero and Avia (established in 1919) or LIAZ, a Liberec-based manufacturer of tractors, dump trucks and flatbed trucks. Besides these firms, which have or had their own development departments, Czech automotive production also includes Karosa and, more recently, SOR Libchavy buses, as  well as trolleybuses (Škoda Electric in Plzeň). Altogether, there are dozens, if not hundreds of companies in the Czech Republic that have know-how connected with development and production of components for the entire automotive industry, including but not limited to engines, chassis, lights, seats, safety glass, wheels, batteries and wiring systems. 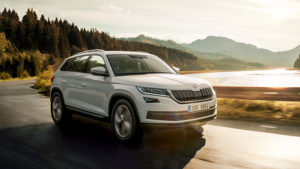 The newest addition to the ŠKODA portfolio – Kodiaq SUV

Not only mechanical engineers

The previously mentioned factories were and are staffed by engineers from the two most important polytechnic institutes in the country. Professor Jan Macek headed the Department of Automotive, Combustion Engine and Railway Engineering at the Czech Technical University (CTU) in Prague for many years and today serves as the vice dean of the Faculty of Mechanical Engineering for science and research. What is he developing there with his colleagues?

“We are participating in a European project involving internal combustion engines, where in cooperation with Renault we are continuing in the design and optimisation of a small two-stroke engine for passenger cars. We are working on the air path… We are also taking part in two European projects focused on optimising the energy consumption of electric cars and hybrid freight vehicles. In the area of piston engines, we have another project involving the use of natural gas in passenger cars, particularly engines that are designed from the outset to run on natural gas,” Macek told the VVAutomotive.cz server, which is focused on development in the sector, in December last year.

The CTU department is connected with the Josef Božek Competence Centre for the Automotive Industry (which is named after the designer of the first steam-powered vehicle in the Czech lands in 1815). Local engineers cooperate not only with their colleagues in the faculties of transportation and electrical engineering, but also with major industrial players: Škoda Auto, Tatra Trucks, Honeywell, ČZ Strakonice, Motorpal, Brano, TÜV SÜD Czech and Ricardo Prague. Prague-based engineering has been featured in the mainstream media in recent years particularly due to the Formula Student cars that have been developed by dozens of CTU students since 2009, including this year’s FS.09 model.

However there are more research groups at the same university which have something to contribute to the automotive sector. While in the mechatronics section, the current dean of the “machine shop”, Michael Valášek, focused on smart chassis that conserve not only axles, but also the road. In the Faculty of Electrical Engineering – specifically in the Department of Control Engineering (headed by Professor Michael Šebek) – scientists are working on algorithms and concepts that can be used in autonomous vehicles. A new centre of the Czech Institute of Informatics, Robotics and Cybernetics has at its core researchers focusing on machine vision usable in vehicles (Professor Václav Hlaváč). At Charles University, physicist Vladimír Matolín is using cerium oxide to develop fuel cells for hydrogen-powered cars. The solution has been patented. 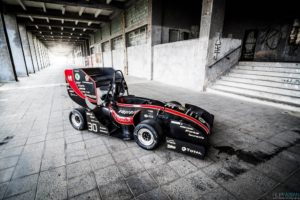 Ideas that aid innovation in the automotive industry do not originate only in Prague. At Brno University of Technology (BUT) and the related Central European Institute of Technology, a research group led by Pavel Václavek is working on projects investigating the potential of environmentally friendly vehicles. Brno, which proudly participates in Smart Cities projects, wants to be a pioneer of electromobility; with dozens of various partners, scientists are therefore investigating ways to improve the driving characteristics of electric vehicles.

“They are the automotive industry’s only possibility for using renewable sources to power cars. But they still have various limitations. New technologies in the fields of electronics, microprocessors and algorithms are raising the hope that they will become common means of transportation,” Professor Václavek told the iDNES.cz server two years ago. More conventional research and development is the domain of the Institute of Automotive Engineering at BUT, which has departments focused not only on internal combustion engines, but also on cars and tractors. Not only vehicle design and alternative drive systems are dealt with at the institute, but also reduction of noise and environmental damage. Therefore, the institute boasts cooperation with major firms such as Škoda Auto, Bosch Diesel, Tedom, FEV and the Czech tractor manufacturer Zetor.