The Greatest Science Story in the Czech Republic

Professor Antonín Holý dedicated himself to basic research that brought forth effective agents against HIV and hepatitis. His parent institute now ranks among the best facilities in the Czech Republic.

There is no more famous scientific case in the Czech Republic. Organic chemist Antonín Holý (1936-2012) spent several decades in the laboratory seeking out substances that could serve as antiviral drugs. His domain was nucleic acid chemistry. His trials – and later his key collaboration with Erik De Clercq of Leuven – gradually led to the inception of antiherpetic and antiviral drugs for treatment of HIV/AIDS, smallpox and hepatitis B. Drugs such as Hepsera, Viread and Truvada produced by the American company Gilead Sciences and used literally around the world brought hundreds of millions of crowns from patents to the parent institute.

In 1960, Professor Holý began working at the Institute of Organic Chemistry and Biochemistry (IOCB) of the then Czechoslovak Academy of Sciences, which had been established seven years prior around a group led by the great chemist František Šorm. Holý met the young Belgian virologist De Clercq in 1976, thanks to which extraordinarily productive collaboration between the IOCB and Rega Institut Leuven on a new group of antivirals was initiated. The scientists focused on a group of acyclic nucleoside phosphonates that proved to be very promising. “In any institution other than the Academy of Sciences, it would have been difficult for me to get to where I am today,” Holý said. He managed to bring several substances into drug form and, following the fall of the Iron Curtain in 1989, introduced them to the market and mainly to patients in cooperation with pharmacists from the United States. 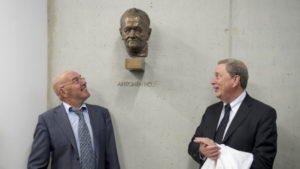 It can be said that today’s institute of the Academy of Science of the Czech Republic – known in the world under the English abbreviation “IOCB Prague” – is following the same line, which is to focus on basic research of the highest quality while also seeking out opportunities for its application and commercial use. Many of Holý’s successors, including both scientists and science managers, still work at the institute, which in recent years has constructed a modern building and laboratories with its own money. Antonín Holý served as the director of the institute from 1994 to 2002 and was fortunately succeeded in that role by the enlightened Zdeněk Havlas and Zdeněk Hostomský, thanks to whom the current IOCB is the pride of Czech science. The IOCB operates on a highly international basis, opens prestigious positions, hosts lectures by Nobel laureates and leading experts, and publishes research results in top journals.

“Local research is very fundamental and driven by the search for knowledge. Nevertheless, there is strong experience here as well as growing interest in applied results especially in the development and design of medicines. A major part of the IOCB’s research is focused on identifying potential targets and biologically active agents for therapeutic use in human and animal diseases,” stated a major international audit of the institute for the period 2010-2014. The report praised the institute for its use of money earned from patents and for the quality of its researchers, a number of whom teach at Charles University and the University of Chemistry and Technology, from where the IOCB most frequently recruits young postgraduate students. More than 600 people work at the IOCB, making it the largest non-university chemistry institution in the Czech Republic.

“The institute’s bibliographical footprint is impressive (roughly 250-300 articles published annually, which is a rather modest figure with respect to the number of workers)… Of course, the importance of published works is rather more evident from the qualitative perspective, in that many articles are published in the most prestigious journals (Nature, Science, PNAS, JACS, Angewandte Chemie),” the foreign auditors stated. They also emphasised the two prestigious five-year Advanced ERC grants obtained in 2009 (Josef Michl) and 2010 (Detlef Schroeder†).

Two other grants bearing the label of the European Research Council found their way to Prague’s Dejvice district in 2015 thanks to foreign scientists. One of the grants is partially being handled by Michael J. Bojdys (smart modification of graphene) and Milan Vrábel, who came to Prague from Munich. “Using so-called bioorthogonal reactions – i.e. reactions that can occur in the physiological environment on various biomolecules – it is possible to prepare compounds combining molecules and biological substances in a system with unique properties,” Vrábel told Lidové noviny at that time. Thanks to the new methods, it would be possible to, for example, mark parts of cells for the purposes of nuclear magnetic resonance and to develop therapies and even vaccines.

Numerous promising subjects are being dealt with at the institute. There are roughly forty research groups at the institute. A significant leader in quantum chemistry and source of inspiration for his younger colleagues is Professor Pavel Hobza, one of the most frequently cited Czech scientists ever and a member of the global elite according to the Thomson Reuters database (more than 30,000 scientific citations!). Another pillar of the institute is physical chemist Pavel Jungwirth, who with his group focuses on computational chemistry. The group led by Michal Hocek, who studied directly under Professor Holý, is engaged in medicinal chemistry of nucleic acids. One of the best examples in the Academy of Sciences as a whole, which was highlighted by its management – specifically former chairman Jiří Drahoš and current chairwoman Eva Zažímalová – is the research conducted by German scientist Ullrich Jahn: natural product chemistry. Among other things, Jahn determined how pheromones of the bee parasite Stylops muelleri are formed and he is also developing tools for chemical synthesis of complex natural molecules. The auditors did not find any weaknesses in the group. The team led by Zlatko Janeba has also had successes and the groups headed by Jiří Jiráček (chemistry and biology of insuline), Pavlína Řezáčová (structural biology), Iva Pichová (microbial proteins) and a number of others have received excellent evaluations. 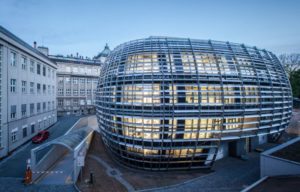 The new building of IOCB Prague

An institute known by the public

The thorough audit praised another leader, Jan Konvalinka (who is also the current vice-rector for research at Charles University), not only for his teaching and ties to academia, but also for his popularisation of science. Konvalinka’s team focuses on proteases of human pathogens and works with the HIV virus. In 2015, these scientists published in Nature Communications an article on the creation of a photosensitive inhibitor of the viral enzyme that HIV needs for its life cycle. The inhibitor blocks the virus in a certain phase of its development – shortly before the onset of maturation – and the virus starts to mature following illumination with a laser.

“We finally have a tool that a lot of groups have long striven for: we can now study the process by which a viral partical matures, step by step… The process is decisive for the infectiousness of a virus, since an immature particle is not infectious. We may learn something that can be used in treatment, but that is the future,” Konvalinka said at the time in the Czech media, which was understandably very interested in the unique discovery of a “virus turned on with light/laser”. As was mentioned above, publication in the Nature family of journals is not unusual for the IOCB; the institute’s lasting strategy is to aim for journals in the first decile or at least in the first quartile in terms of quality.

Of course, the tradition of this institution, which journalists and the Czech public call “Holý’s Institute”, involves bringing good ideas to fruition and putting them into practice.  Therefore, the institute established its own Technology Transfer Office (IOCB-TTO) headed by organic chemist Martin Fusek, who has experience from firms such as Sigma-Aldrich and Merck. On the website featuring “success stories” of the IOCB, the largest amount of space is understandably dedicated to the antivirals derived from Holý’s work (Atripla, Truvada), though that is far from being the only noteworthy item. It pays off to follow the news.