Lighting the way (with lasers) to good times

British academics and high-tech firms are attracted by Czech lasers, as well as biotechnology. The topic of Brexit frequently leads to a search for additional links between the “isles” and the continent.

It is rather varied collaboration. In one field, there is the latest basic research of genome dynamics (which in the future can help to eradicate Parkinson’s and Alzheimer-Fischer’s disease) and, in another field, top-level applied research involving the development of lasers for industrial use. Such are the areas of collaboration between Czech and British scientists, the breadth of which is indicated by the number of scientific publications on which the two sides have collaborated.

In 2016-2017, Czech scientists published nearly sixteen thousand studies, as registered by Web of Science, while their British colleagues are “accomplices” in 2,913 of those, i.e. nearly one-fifth! That is the third largest number of international collaborations: Czechs have more joint articles only with Germans (3,918) and Americans (3,862).

Furthermore, such figures stand out in contrast with other countries of the so-called “new Europe”, the countries of the so-called EU 13, where only Poland, a much larger country, has more collaborative studies with Britain (4,777). Lagging far behind Czech-British scientific relations, however difficult it may be to gauge them, are British ties with Hungary (2,339) and Romania (1,462).

Preparation of a vaccine. Source: shutterstock

This by far does not pertain only to blue-sky research. “The possibilities here are unbelievable,” Professor Andrew Miller of King’s College London said this spring in Times Higher Education magazine, when he recommended that his colleagues should take a look at Central and Eastern Europe. Miller himself found capable partners in Brno, at the Veterinary Research Institute. With Jaroslav Turánek’s team from the institute’s department of pharmacology and immunotherapy, Miller is developing vaccination methods without the necessity of needle punctures. This involves an adhesive patch placed under the tongue, which ensures that the vaccine enters the body through saliva and is released where it is needed. In spring 2017, this scientific collaboration was supported by a major state research grant in the amount of approximately CZK 200 million.

A significant portion of funding for research in the Czech Republic comes from EU funds. And, due to the negotiated Brexit, the country’s permanent and ongoing membership in the European Union makes it rather more interesting to Brits than it was in the past.

British universities and research teams are taking continental ties into consideration, where schools and institutions in major cities such as Prague (Charles University, Czech Technical University), Brno (Masaryk University, Brno University of Technology), Olomouc (Palacký University) and the industrial city of Ostrava are an enticement.

This involves prestigious European Research Council (ERC) grants. This year, for example, a group led by Professor Keith Caldecott of the University of Sussex transferred part of its research under an ERC Advanced grant to the Institute of Molecular Genetics of the Academy of Sciences of the Czech Republic in Prague. In the department of genome dynamics, researchers are focusing on repairing damaged DNA (and the XRCC1 protein), as deeper knowledge of these mechanisms could contribute to the fight against neurodegenerative disorders such as Huntington’s, Parkinson’s and Alzheimer’s disease.

Another scientist who has long been (and will continue to be) connected with British science is the outstanding Czech mathematician Daniel Kráľ. As a professor at the University of Warwick, Kráľ has received two ERC grants for research of graph theory, though from 1 September 2018 he will arrange part of a consolidation grant at the Faculty of Informatics of Masaryk University in Brno. “In my opinion, it is ideal to spend part of one’s time in Europe and part in North America,” Kráľ told the website Universitas, having newly exchanged Britain for Brno.

The Moravian metropolis is known for its innovation potential, as it is home to both universities and innovative firms including Honeywell’s research centre and strong players in the field of microscopy (Tescan, FEI, Delong). Globally successful start-ups, such as the airline-ticket search engine Kiwi.com (previously Skypicker) and Y Soft (printer control), have been established here.

Teaming in the area of lasers

Scientists and firms from both countries are engaged in numerous collaborations within Horizon 2020, an EU programme that supports research and development. “Great Britain is leaving the European Union, but it isn’t abandoning Europe. In the H2020 programme, there are currently more than 380 joint projects in which Czech, British and other teams are conducting research together,” British science attaché Otakar Fojt told Lidové noviny in May. Fojt, a Czech who earned his doctorate at Oxford and worked at the Fields Institute in Toronto, is an important liaison for both sides. It is not an accident that Fojt was recognised this year as the best diplomat of the British Science and Innovation Network.

Fojt has work for the British embassy in Prague for more than fifteen years. What is the most interesting aspect of Czech science for Brits? “The Czech Republic’s involvement in international research infrastructures, the amount of funding that Czechs invest in science, top-level disciplines where we have something to offer and that the Brits don’t have, and unique technical equipment, such as the lasers in Dolní Břežany,” Fojt explains. Conversely, the Czech side is interested in the know-how of innovation centres (Catapult network).

The fact that Czech science has a good reputation in Great Britain is further attested by Richard Catlow, a foreign representative of the Royal Society. In February 2018, Catlow assured his Czech colleagues of the tremendous interest in cooperation with the Academy of Sciences of the Czech Republic, which has more than fifty institutes focused on numerous fields, ranging from natural sciences to more technical disciplines and concepts that are applicable in industry (optics, microscopy, instrument technology).

During his visit this year, he also arranged future connections between the two countries following Brexit. “I expect that collaboration with European scientists won’t change… However, we should know far more about science here and be in contact with each other more, as there are very interesting laser centres here, for example,” said Catlow, who is also an outstanding chemist. 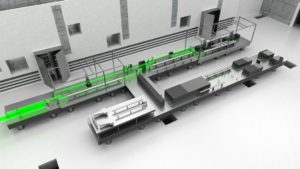 Catlow was referring to two laser centres in particular. At a cost of CZK 7 billion, the Czech Republic set up near Prague the EU-backed Extreme Light Infrastructure (ELI) super-laser project with the planned most powerful laser in the world from Livermore and the more industry-oriented HiLASE centre, which also features a powerful laser (Bivoj). In May last year, the HiLASE centre engaged in a teaming project with the Brits, which will receive funding in the amount of CZK 1.2 billion. “We are using the money for the further development of lasers according to the actual needs of high-tech industry and for transfer of verified know-how of the British Science and Technology Facilities Council (STFC) for establishing cooperation with firms,” HiLASE director Tomáš Mocek told Lidové noviny. The launch was attended by British ambassador Jan Thompson, who participated in the start of the five-year research programme aimed at improving the properties of metallic materials used in the aerospace industry (peening) and a number of medical applications in the production of hip joints. Not even Brexit can jeopardise such.