Materials sciences for a better future

New materials are already being used in medicine, construction, power generation, electrical engineering and the automotive industry. The Czech Republic takes research in this area seriously and is investing in it.

In March this year, scientists in Olomouc issued a surprising report. Magnets do not have to be made only of metal! Using graphene, a super-thin form of carbon, they produced the first non-metallic magnet that retains magnetic properties at room temperature. The scientists thus shattered an age-old rule, as all magnetic materials used up to now have been based on metals and metallic compounds. The research was published in the journal Nature Communications and it can be expected that in the coming years chemically modified graphene will be put to various uses in biomedicine and electronics.

“We had suspected for several years that the path to magnetic carbon may lead through graphene – a single two-dimensional layer of carbon atoms. By modifying graphene using other non-metallic elements such as fluorine, hydrogen and oxygen, we created new sources of magnetic moments, which communicate with each other astonishingly well, even at ordinary room temperature. This is a tremendous advancement in the possibilities of using organic magnets,” says leading Czech chemist Radek Zbořil, director of the Regional Centre of Advanced Technologies and Materials (RCATM) in Olomouc.

Numerous scientific results and concepts have “poured” from this research institute at Palacký University in recent years. Besides Zbořil, Michal Otyepka, who was recently awarded a prestigious ERC Consolidator Grant for his “2D chemistry” project, is also working on the development of nanostructures, materials and modified graphene. One of the most cited Czech scientists, quantum chemist Pavel Hobza, also works at the centre. In short, things are happening in the Olomouc region. 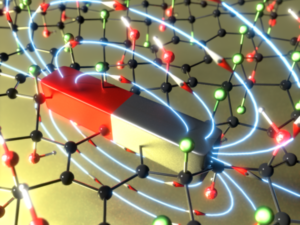 With the highest-rated Excellent teams project, RCATM was the winner of a competition of the Ministry of Education at the beginning of 2017. The centre received CZK 150 million for its “hybrid nanostructures” research, thanks to which new materials that are usable in the field of renewable energy will be developed. A new group that will develop nanomaterials based on inexpensive photocatalytic active metal oxides (e.g. titanium oxide) will be led by Patrik Schmuki of Erlangen, who is a star of materials chemistry and photoelectrochemistry. “Professor Schmuki has appeared on the list of the world’s most cited scientists compiled by the Thomson Reuters agency and is also an ERC Advanced grant laureate,” RCATM director Zbořil told Lidové noviny in January. Cornell University, EPFL Lausanne and a Korean polytechnic university have also pledged collaboration.

Among the 32 Excellent teams projects in the Czech Republic, there are four other “materials” projects, with Charles University in Prague having twice received generous support. Aid in the amount of CZK 216 million is helping the Charles University Centre of Advanced Materials at the natural sciences faculty, which is under the leadership of Russell E. Morris of the University of St. Andrews, to become a global capacity in the area of porous materials and development of materials for catalytic, optical and medical uses. The Nanomaterials Centre for Advanced Applications, which is led by Milan Dopita at the elite mathematics and physics faculty, has received CZK 137 million. And two institutes of the Academy of Sciences have found success: state aid in the amount of CZK 195 million was awarded to the Advanced Preparation of Functional Materials project at the Institute of Physics and CZK 151 million was provided to the Institute of Thermomechanics for its Research of Dynamic Behaviour of Materials in Mechanical Engineering project.

Nine from the Academy of Sciences

The strongest institution in terms of basic research and fundamental findings in the area of new materials is the Academy of Sciences of the Czech Republic (ASCR). “The whole society has been, is and will be critically dependent on materials of all kinds. Construction materials are the foundation of progress in all areas: from equipment for efficient power generation, through the next generation of modern high-strength steel for the automotive industry, high-temperature super-alloys for aircraft engines, life-saving medical implants and nanomaterials with unique properties, to functional materials and composites for the broadest range of uses in engineering,” says Professor Ludvík Kunz of the ASCR Institute of Physics of Materials, who at the Czech Academy of Sciences is the coordinator of a broad research programme under the name New Materials Based on Metals, Ceramics and Composites.

“It is not possible to achieve further progress without basic research and without thorough recognition of material properties and their relationship to the microstructure determining those properties. It is thus natural that research attention is globally focused on development of new materials, as well as development of technologies for processing them, in all developed countries,” academics say. It is not an accident that the Academy of Sciences indisputably has the strongest publication presence from the Czech Republic in the respected Nature Index ranking, mainly in chemistry and physics.

A century of industrial tradition

Almost nothing would be possible without materials. They are everywhere around us. Materials that comprise houses, highways, cars, power-line masts, food packaging, toys and computer, tablet and mobile-phone displays. Smart and functional materials offer far more than “ordinary” plastics and metals. One of the global trends is nanostructures, which are able to do things: they are self-cleaning and repel moisture, and they are tremendously strong and durable.

An advantage of the Czech Republic is the more than a century of industrial tradition of the Czech Lands, which were the industrial “heart” of the Austro-Hungarian Empire. Numerous companies in Prague, Kladno, Plzeň and Ostrava could not get along without their own development. The University of West Bohemia in Plzeň, which boasts a strong faculty of applied sciences and the New Technologies for the Information Society centre focused on development of thin-layer materials created with plasma technologies, has close ties to local firms. An industrial breeding ground gave rise to the Technical University of Ostrava, where an entire faculty is focused on metallurgy and materials engineering. The university’s origins date back to 1849. “We provide highly educated graduates in the areas of metallurgy, materials engineering, chemical technologies, thermal technology and industrial ceramics, as well as management in the field of metallurgy. We are a partner of a broad spectrum of industrial sectors in both the consultation and research areas,” the faculty states.

And other strong polytechnic institutions

Of course, links to industry and training of engineers are a guarantee of effective research. The two largest technical universities in the country have both. The first is the Czech Technical University with eight faculties (including civil, mechanical and biomedical engineering) and several institutes, among which the Klokner Institute excels. Established in 1921 as a research and testing institute focused on materials and construction engineering,

today this facility engages in research of micro- and micromechanics of new construction materials.

Brno University of Technology (BUT) also has eight faculties. The objective of the chemistry faculty, for example, is illustrated by its establishment of the Institute of Chemical Materials and the Centre of Materials Research at a cost of CZK 233 million from EU funding. The centre presents itself as being primarily focused on applied research in the area of inorganic materials, transportation systems for healthcare and sensors based on organic semiconductors. Together with the scientifically very effective Masaryk University in Brno, BUT is also a co-founder of the ambitious Central European Institute of Technology (CEITEC), one of whose research pillars is focused on advanced materials. As stated on the website of its guarantor, Professor Josef Jančář, “Combined research in the area of advanced ceramic materials, polymeric composites and composites based on metals is focused on applications in medicine, mechanical engineering, electrical engineering, energy, chemistry and construction.” Specifically, in the future various developed materials can be used in surgical and dental implants and as super-alloys and antibacterial walls, self-cleaning coatings and so on. 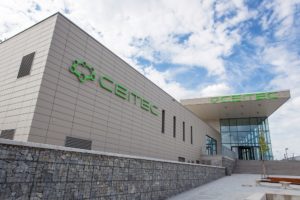 The Technical University of Liberec takes pride in its specialisation in “nano”. Thanks to its specialised textile faculty, which is unique in the Czech Republic, it excels in a range of materials. The smaller Tomáš Baťa University (TBU) in Zlín, where various food and shoe companies are located, excels in the area of polymers and is also the home of the Centre of Polymer Systems. TBU’s current dean, Professor Petr Sáha, was president of the global Polymer Processing Society from 2005 to 2009 and still benefits from the contacts established during that time. “Researchers come to us: we have at least two offers from abroad every week,” Sáha said in the press last year. Specialists on staff include Indians and Chinese, as well as scientists from Turkey, Russia and Italy. The teams focus on development of biocomposites and medical gels for wound coverage and materials with numerous useful electrical and magnetic properties. Biocomposites comprise a trend on which a unique doctoral study programme is focused. Besides specialised articles, major corporations such as Continental, Procter & Gamble and Pegas Nonwovens have expressed interest in the university’s development of polymers.